With the sun blazing and the temperature soaring to 37C, it’s time for a refreshing dip in the Pacific.
But, this is no ordinary ocean swim. 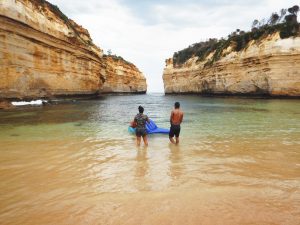 My son, Alex, and I’s plunge is framed by the Twelve Apostles, the magnificent limestone stacks towering 70 metres above the Pacific, 250 kilometres outside of Melbourne, Australia.
Despite the distance from the city, tourists and locals alike flock to the Apostles on day trips to be wowed by the natural wonder.
In fact, the Apostles are one of the biggest attractions in the state of Victoria, of which Melbourne is the capital.
The Apostles stand majestically, the tougher remnants of erosion of the nearby softer limestone-and-sandstone cliffs.

On a Bunyip Tours outing, the 500 kilometre round trip is no hardship for pleasure seekers.
Guide Fiona drives the van along the Great Ocean Road, a two-lane ribbon of blacktop so spectacular it has ‘great’ built right into its name.
It’s considered Australia’s premier coastal drive for it’s constant killer views of the Pacific to one side and eucalyptus forests on the other. 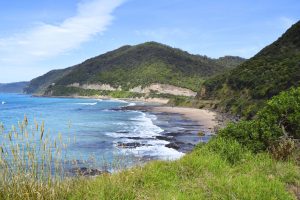 There are also ample stops at beaches that inspired international surf brands such as Ripcurl, Billabong and Roxy; the Kennett River to hand feed neon-hued King parrots; and Cape Otway to climb Australia’s oldest lighthouse and have lunch at the adjacent Cafe.
But, the Apostles are the star of the show and excitement reverberates in the van as we near them.
This is when Fiona informs us there are only eight Apostles, not the 12 promised in the name.
As a marketing ploy, the limestone spectacles were given the catchy name from the Bible despite being numerically incorrect.
Undaunted, we pile out of the van and view them first from the clifftop before hiking and descending 100 step to the beach where the Apostles loom. 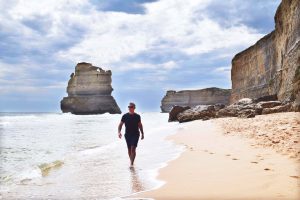 This being an epic boys’ trip to Australia, Alex and I vow to keep the adventure rolling in Melbourne.
We hurl ourselves off the rooftop of a seven-storey building with Rap Jumping, the company that has turned the forward harnessed rappelling originated by the Australian Army’s special forces into an adrenalin sport. 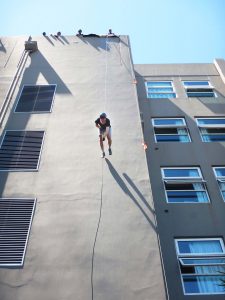 With Kayak Melbourne we paddle through downtown’s skyscrapers on the Yarra River. 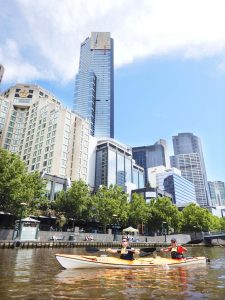 We’ll return to the river time and time again.
It’s where everyone gathers to stroll and cycle the promenades and eat and drink at the riverfront and floating restaurants and bars.
On the 88th floor of the Eureka Tower, overlooking the river, we get in a transparent box to be suspended over the edge.
And we cycle some of the many urban paths to make our way to the Melbourne Star, the Ferris wheel that rotates to a height equivalent to a 60-storey building.
It’s not a trip to Australia without visiting the country’s weird and wonderful wildlife, from kangaroos and koalas to platypus and Tasmanian devils, which we see on a day trip to Healesville Sanctuary. 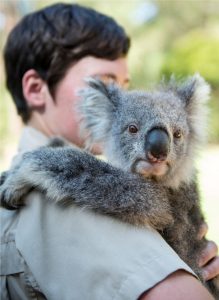 Just because this is a guys’ adventure trip doesn’t mean the accommodations can’t be luxe.
We start out in a sleek 29th floor two-bedroom suite at the well-located Austalis, part of the Melbourne Short Stay Apartments’ portfolio.
And then we move to Crown Metropol Hotel, part of the massive riverfront Crown Casino complex that features a 27th floor sky pool and a 28th floor Sky Bar.
One of Crown’s signature restaurants is Rockpool, a high-end Aussie steakhouse by celebrity chef Neil Perry, where Alex and I nosh on medium-rare fillets paired with Head Brunette Shiraz.

Air Canada’s recently launched four-times-weekly non-stop service between Vancouver and Melbourne is the first-and-only link between Canada and the Australian city.
At 15-and-half hours and 13,200 kilometres, it’s also the longest flight Air Canada does.
However, the journey is as comfortable as can be on the new Dreamliner 9 jet, especially if you splurge for a business-class seat that becomes a lie-flat bed to get a good sleep to arrive in Oz raring to go.

Check out VisitMelbourne.com and AirCanada.