Of Flappers and Floozies

In my periphery vision, slowly and steadily, a hulking, dark and indeterminate shadow appears.
My heart quickens and there’s an involuntarily sharp intake of breath on my snorkel mouthpiece.
I first focus on an elaborate pattern of white dots on a glossy black background. 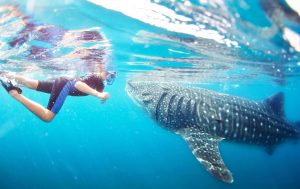 Huge gills below flutter in the water.
A pectoral fin appears, working like a lazy pendulum, and five metres behind a massive tail sweeps.
I work the flippers on my feet harder to speed up and get closer, and suddenly, I’m eye to eye with a whale shark, the largest fish on the planet.
Given his size, eight-metres and counting, it’s a surprise this shark’s eyes are no bigger than mine.
As such, the stare down is startlingly intimate and initially frightening.
After all, this is a massive fish of the shark species.
But not to fear.
While this gentle giant has a gaping mouth, his teeth are miniscule and he’s interested only in feasting only on plankton.
Therefore, he is completely indifferent to my presence.
So, as long as I follow the rules – keep a one metre distance and stay away from the tail – he and I are ideal swimming partners.
We establish a rhythm, him languidly propelling himself through the plankton-rich sea feeding and me keeping pace.
It’s mesmerizing, it’s intoxicating, it’s one of those bucket list activities that can only be believed when experienced.
After 10 minutes, guide Leo Ramirez taps my shoulder to return to the group, which includes my wife, Kerry, to watch two other whale sharks feed while suspended vertically in the water.
Again, I’m fascinated.
But nothing can match my first time coming eye-to-eye with a magnificent whale shark.
Back on the boat, everyone is excitedly peppering Leo and marine biologist Mariana Padilla with questions.
I find out my one-on-one buddy has been nicknamed Diggy Diggy by the crew of Baja Charters, the tour operator we’ve booked for this once-in-a-lifetime thrill.
He has a scar on his dorsal fin and is about 20 years old, a youngster, considering these creatures live up to 120 years and grow to 18 metres.
Whale sharks, aren’t whales at all, but sharks.
They earned the whale adjective due to their impressive size.
Every winter, these docile and harmless sharks winter in the Bay of Cortez near La Paz, Mexico at the tip of the Baja Peninsula.
And they’ve become a tourism spectacle.
Several companies offer tours to interact with these incredible beasts under strict government guidelines.
We chose Baja Charters because it has a stellar reputation and is the most luxurious of the operators. 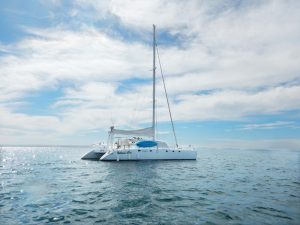 After our whale shark fun, we return on the Island Kitty tender to the 15-metre Island Cat catamaran for warm showers and more animated conversation over margaritas and steak-and-chicken tacos in the sunshine on deck.
The whale shark encounter is the highlight of our getaway to the Los Cabos region of the Baja, which seamlessly blends a Southern California aesthetic with Mexican authenticity.
We enjoy that vibe and completely unwind at two of Los Cabo’s most luxurious hotels, both in the five-star Auberge Resorts Collection.
At Chileno Bay Resort we switch it up between lounging in a cabana beside the three-tier infinity pools and swimming and snorkelling in a protected cove of the Sea of Cortez.
Our sumptuous room provides the type of no-alarm sleep-ins that perfect vacations are made of.
We dine by candlelight clifftop at the al fresco Comal on blackened tuna and Sauvignon Blanc. 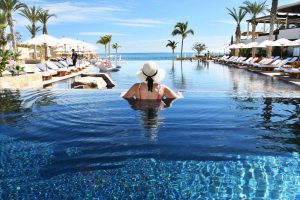 Speaking of nouveau Mexican cuisine, after moving to the area’s second Auberge resort, Esperanza, we perch ourselves on the promontory that is Cocina del Mar restaurant for totoaba fish for two paired with Mexican sparkling wine.
With waves crashing below, it’s the most romantic and atmospheric dinner we’ve ever had. 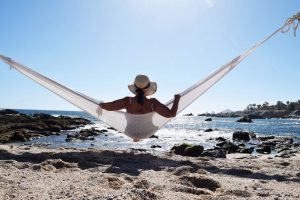 Otherwise, we only leave our casita with the disappearing glass wall for couple time in the white hammock at the beach and quick plunges in yet another infinity pool.
Air Canada flies between San Jose del Cabo and Vancouver, Calgary and Toronto with the airline’s comfortable, new, quiet and fuel-efficient 737 Max jets.
Check out BajaCharters.com, AubergeResorts.com an AirCanada.com.
–30–