The Sun, Sand and Snorkel excursion goes out on the Cool Runnings II catamaran.

The Bajan Queen partied too hard, and now she’s at rest on the bottom of the Caribbean Sea. But, all is good.

This 45-metre tugboat, which toiled for years at the port in Bridgetown, Barbados and finished out her above-water life as a tourist-party boat, was sunk deliberately in Carlisle Bay in 2001. Now, in only 10 metres of water, she is coral-crusted and serves as a fish-rich marine park and snorkelling magnet.

My wife, Kerry, and I are introduced to the Bajan Queen on Island Routes’ Sun, Sand and Snorkel five-hour excursion aboard the Cool Runnings II catamaran.

She’s the second stop on the itinerary, right beside Ellion, the drug boat sunk in 1989 by the Barbados Coast Guard. As our group of 30 snorkels, the contrast of the vessels’ checkered past to current fishy habitat is not lost on us. Neither is the idyllic setting of melted-gemstone green water, filtered sunshine and reggae playing on the catamaran’s sound system.

The day started when we boarded Cool Runnings II at Bridgetown’s Careenage Marina and took off in a light breeze under clear skies.Our first stop is also in Carlisle Bay, but at a sandy-bottomed section populated by green sea turtles and stingrays. Our guide, Chad Hercules (yes, that’s his real name) lures the sea creatures ever closer to our group of snorkellers with chunks of bread.

The turtles are discs, elegantly gliding through the water and the stingrays resemble a prehistoric bird flapping under the sea.

Back on board, the sails are raised for us to cruise the 15 kilometres to Payne’s Bay at a leisurely nine knots. There’s a lunch of jerk chicken on the catamaran with swimming and sunbathing to follow, all with a view of One Sandy Lane hotel. The hotel is the $15,000-a-night hang out of Barbados’ most-famous daughter, Rihanna.

Days of perfection are often defined this way. They are seared in the memory not just for the warmth, sunshine and scenery, but for how they make you feel. And we feel lucky, content and exhilarated, all at the same time. It’s a Caribbean thing, it’s a Barbados thing, it’s a paradise thing.

Kerry and I get the same tingly feeling at the resort where we’re staying, the uber-romantic, couples-only Sandals Royal Barbados. It’s a five-star luxury resort, so, of course it’s location is spectacular on icing-sugar-soft Maxwell Beach in St. Lawrence Gap.

The accommodations are innovative. The rondoval thatched-roofed bungalows have private patios with plunge pools, outdoor tubs, outdoor showers and butler service. Swim-up suites apply the swim-up bar concept to resort accommodation with the suites’ patio directly connected to an elaborate network of palm-tree bordered pools. Even if your room is on the second, third or fourth floor, it will have an infinity pool or soaker tub for two on the balcony, complete with billowing, white privacy curtains.

Upgraded to a rondoval bungalow with butler, Kerry and I revel in VIP treatment. Room-service breakfasts on the patio are followed by frolic in the plunge pool, then time on the beach or one of the main pools, where our butler has saved prime chairs under an umbrella and placed a cooler with water and whatever we want from the bar.

Again, it’s how a vacation makes you feel, as much as the sumptuousness of the resort, that defines getaway success. And Sandals Royal Barbados makes us feel special, sexy, pampered, relaxed and rejuvenated. 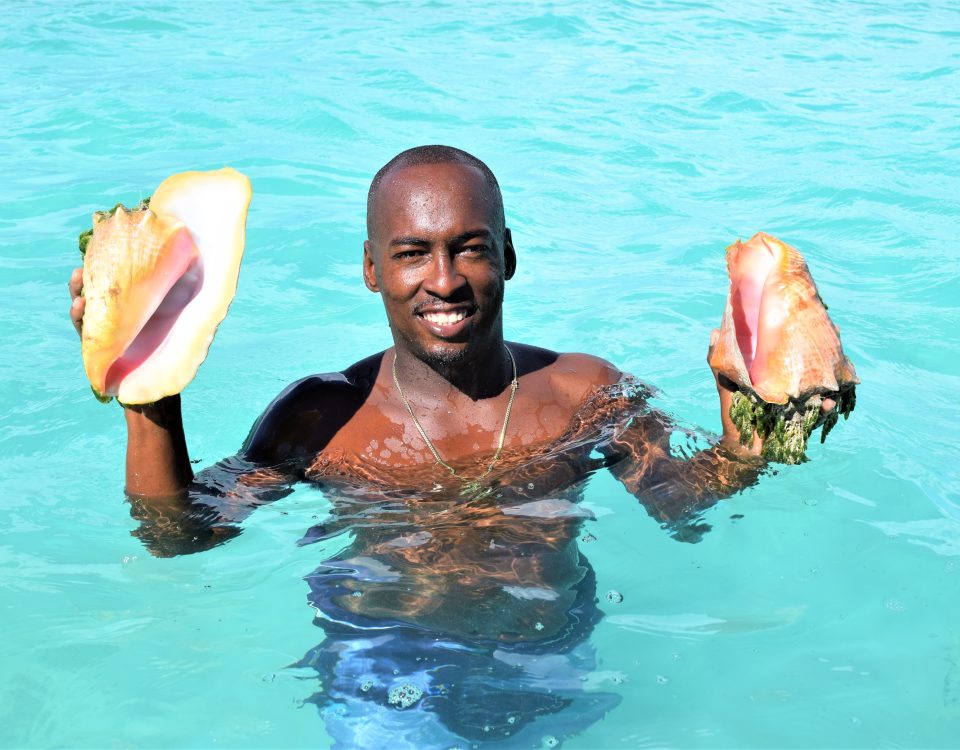 Catching your own lunch in Turks & Caicos 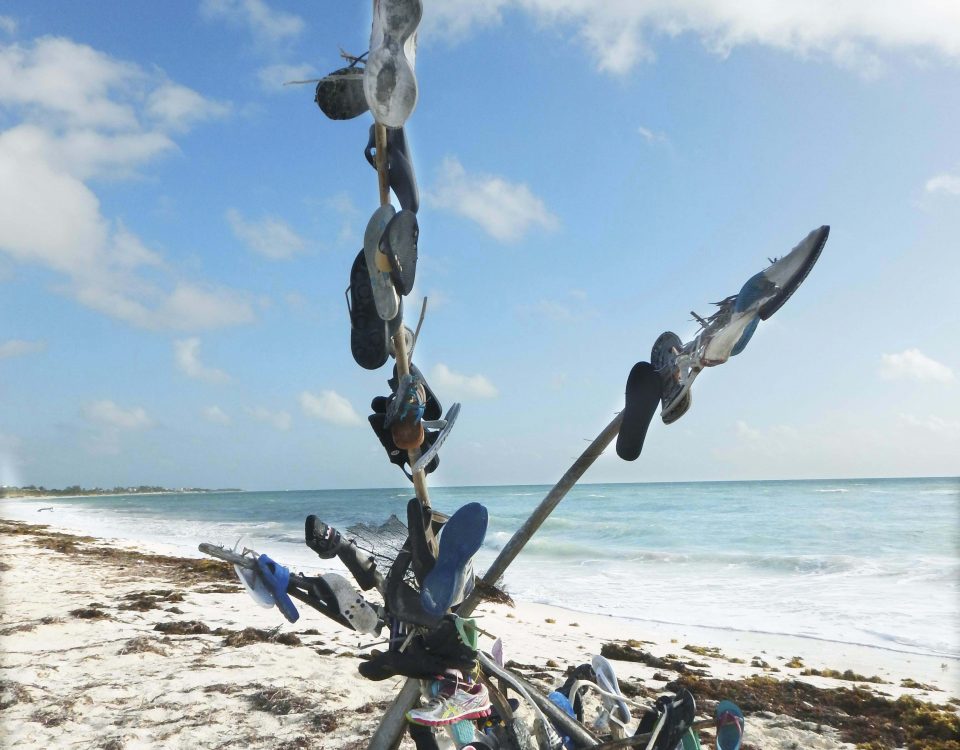 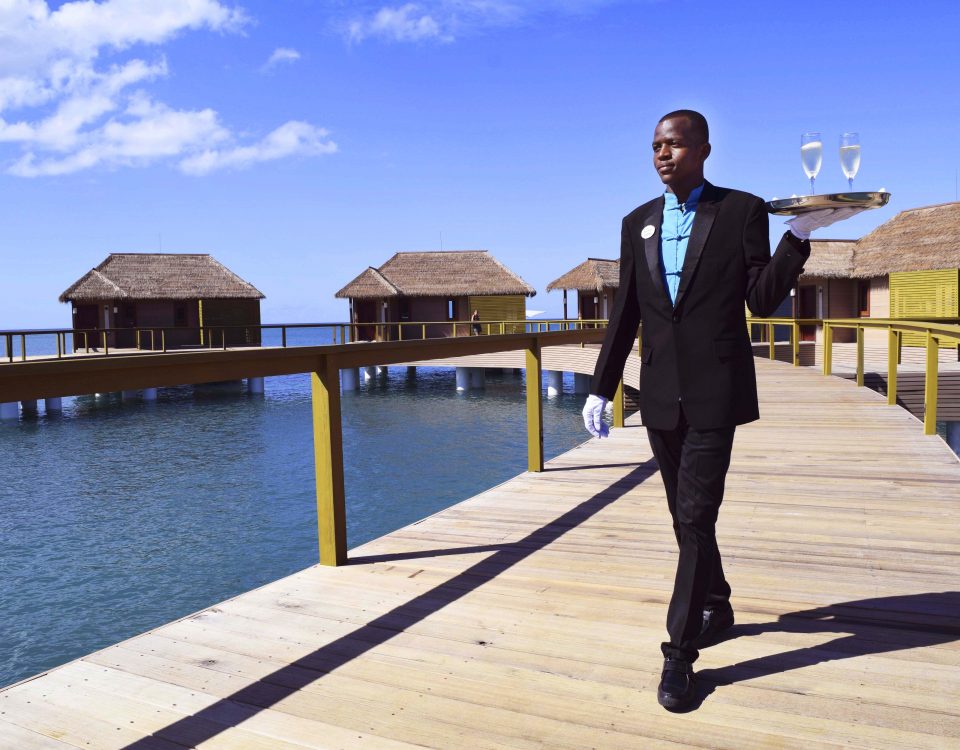