Floating fun central – Houseboats are the way to go!

Melbourne is to Australia what Lyon is to France: the country’s culinary heartbeat.

Melbourne’s more famous cousin, Sydney, has the instantly recognizable landmarks, the beaches, and even the world’s second largest fish market, but it’s Melbourne that will take any gourmand on an arguably tastier journey.

On a recent visit down under, we spent 6 days in Melbourne, savoring every moment of its incredible food scene.   The ethnic dining options don’t, in fact, seem as though they’re exotic or in some way ‘imported.’  The city’s culinary diversity somehow feels as if it’s always been that way.  Of course, that’s not true.  Culinary delights started arriving here years ago from Asia, Africa, Europe, and other far-flung places.  The lure (pun intended) of the freshest of seafood is irresistible, and Melbourne chefs know just how to prepare it.  Asian, Italian and Greek cuisines abound in Melbourne and any ingredient you can think of is found here.

To start your mouth-watering tour, visit the Queen Victoria Market, a foodie’s nirvana and every chef’s essential stop on the way to the kitchen.  This historic market was opened in 1878, and now encompasses two full city blocks.  There are other 19th century neighborhood markets in Melbourne, but the “Queen Vic” is by far the largest and most intact.  It’s located on the northern edge of the city’s vibrant Central Business District (CBD.)

Inside you’ll find the typical market fare:  produce, seafood, meats, breads and cheeses.  But this market, my foodie friends, is anything BUT typical!  At every turn, there’s something interesting to see, learn and most importantly, taste!  Vendors are friendly and will happily answer questions or provide suggestions.  A walking foodie tour is a must, and a lovely native Melburnian gave us two hours of culinary bliss!  We sampled fresh oysters on the half-shell, imported French cheeses, Australian olives and oil, sausage and fresh, hot pasta. 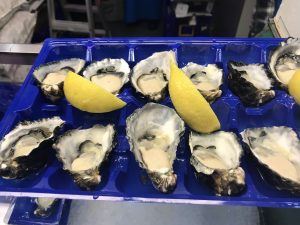 Of course, a trip to Australia wouldn’t be complete without trying grilled kangaroo and emu (the Australians are probably the only culture I can think of that actually eat both animals depicted on their coat of arms.)  Kangaroo is quite delicious….if you don’t think too long about it. 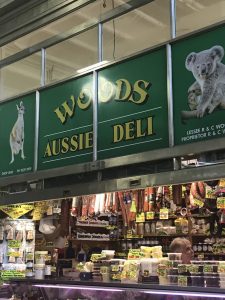 After you’ve strolled the indoor market, head outdoors to the covered produce vendors, and sit & savour some fantastic local wine while watching all the excitement of the market vendors.

Markets are often the inspiration for great meals, but when visiting Melbourne, you won’t be cooking very much due to the plethora of incredible restaurants to try.  Australia is home to the world’s second largest Greek population outside of Greece, and we stumbled upon the Greek Festival while visiting – featuring music, dancing, and of course, delectable street-food! 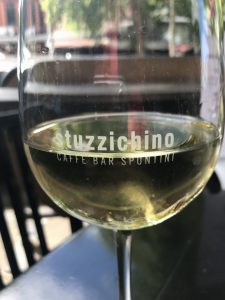 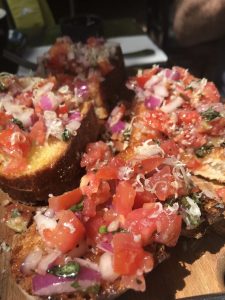 If you prefer Italian, Melbourne’s Little Italy area is the perfect place to while away an afternoon, while enjoying fresh pasta, carefully curated charcuterie and of course amazing wines. Stuzzichino is one of the best places to enjoy bruschetta and a glass of pinot grigio.    “Scopri,” another fine option,  is like a tour of Italy on your plate.

Patio afternoons on Lygon Street should probably be given the same official sporting status as all the other sports this town is crazy for!  Some honest and candid Sydney natives we met admitted that “Melbourne is like that cool cousin you wish you were like, but you aren’t.” 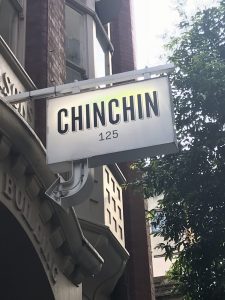 There isn’t an Asian cuisine you can’t find in Melbourne.  A visit to ChinChin, one of the city’s culinary institutions is a must: it’s the perfect collision of Asian, Indian and Australian cuisine.  Don’t bother looking through the menu.  Just say ‘Feed Me’ and you’ll embark on a seven-course tasting menu of their best dishes that will have your tastebuds watering every time you think about the meal (until you can go again!) 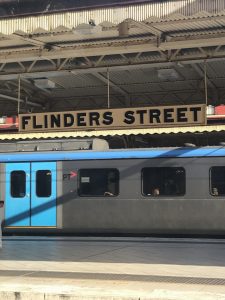 Melbourne’s transit system is world-class, making it easy to get around to all the city’s most coveted dining spots.  Flinders Street station is the perfect spot to start your adventures each day. 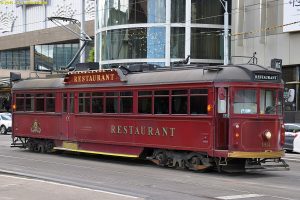 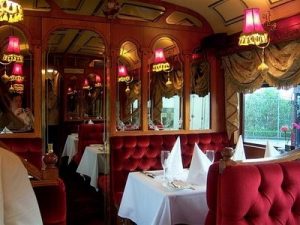 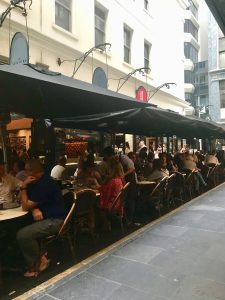 The laneways provide fun, vibrant bars & cafes – the perfect spot to enjoy a local beer or immerse in the city’s famous coffee culture. 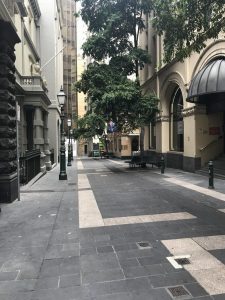 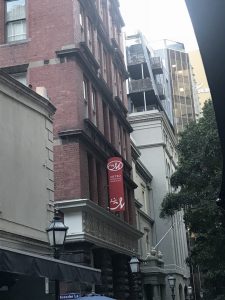 Melbourne is a craving.  It’s food scene has a vibe.  It’s a city with bold, creative flavours.  It’s hip and modern and the furthest thing from stuffy white linen dining.  And it’s sure to make you hunger for another visit.   And guilt-free indulging is encouraged – luckily Melbourne is a very walkable city – guaranteed to work up an appetite.

If you go:  United Airlines from LAX was a comfortable flight (considering the length) and we stayed at the Metro Apartments on Bank Place, a great spot in the heart of the CBD.