Getting “Punched” In Turks & Caicos

By Steve MacNaull With a satisfying crack, the hardball explodes off Miguel Montero’s bat. The crowd pauses for a second, then erupts in applause. The hit line drives deep into center field where Cincinnati Red Scott Schebler deftly scoops it up and catapults it to first base. Montero, who’s an exceptional Chicago Cubs batter, but a slow runner, only makes it to first base. This is Cactus League spring training action for 15 Major League Baseball teams in Arizona.This sunny Saturday afternoon the Reds are visiting the Cubs at Sloan Field in the Phoenix suburb of Mesa. Sloan, with its many nods to Wrigley Field in Chicago, is the Cubs’ home away from home during spring training, which runs March 1 through April 2. As such, the capacity crowd of 15,000, made up mostly of Cubs fans from Chicago on vacation down south, has been waiting for the first Cubs hit of the game.And it doesn’t come until catcher and designated hitter Montero whacks one in the second inning. Montero becomes the Cubs star of the game also scoring the team’s first run in the fourth inning and hitting a solo homer in the sixth. Alas, it isn’t enough. This day the Cubs will fall to the Reds 4-2. Cubs fans are disappointed, but hardly despondent. 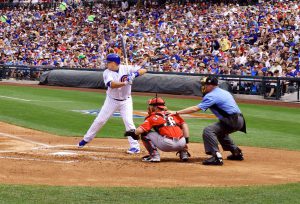 After all, they’ve just spent the afternoon watching professional ball in the sun in March. The stadium announcer made sure during the game to remind the crowd that while the temperature in Mesa is a balmy 81F (27C) it was a freezing 31F (-1C) in Chicago. Being built in 2014 with a capacity of 15,000, Sloan is the newest and largest of the 10 spring training stadiums in the Phoenix area. My dad, my son and I have timed our jaunt to Phoenix from the Canadian cold to be an epic three-generation boys spring training and desert adventure. My dad and my son are baseball fanatics. Me, not so much. But the chance to spend time together soaking up the festival baseball atmosphere and the Arizona sun makes it once-in-a-lifetime special. Part of the ritual at Sloan is eating the same hot dogs and drinking the same beer as they do at Wrigley and getting some die-hard Cubs fans to sing Take Me Out the Ball Game while standing atop the home team’s dugout during the seventh inning stretch. 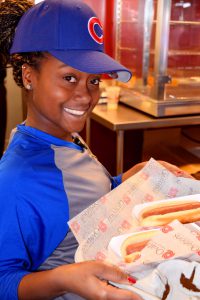 Speaking of the dugout, we had extraordinary seats right behind it, so we could see the smile on Montero’s face as he high-fived teammates after scoring. We also shuttle over to the Los Angeles Angels’ spring training home of Tempe Diablo Stadium in that Phoenix suburb two days later to catch the Angels fall to the Chicago White Sox 9-4. Again another sunny afternoon at the ballpark. 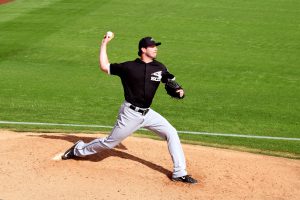 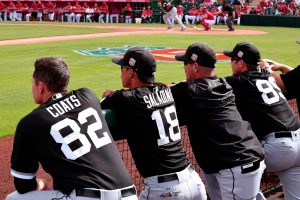 Spring training makes March in this area the peak of peak season, said Toni Smith of the Tempe Tourism office when we bump into her at downtown’s Blasted Barley Pub for pre-game burgers and beer. The economic impact is over US$800 million annually with fans flocking to over 200 games to see 15 teams in action at 10 stadiums. Spring training in the Phoenix area for teams in central and west U.S. has been a tradition since 1947 and has created the greatest concentration of professional baseball facilities in the country. Major League Baseball teams from the eastern half of the U.S. and the Toronto Blue Jays have Grapefruit League in Florida in March. But, man cannot live by baseball alone. So, being Canadian we seek out NHL hockey and watch the Arizona Coyotes best the Florida Panthers 5-1 at Gila River Arena. We also trek out into the Sonoran Desert to pose with 150-year-old Saguaro cactus and drive the Apache Trail to ride the Dolly Steamboat on Canyon Lake and eat prickly-pear cactus ice cream in Tortilla Flat. 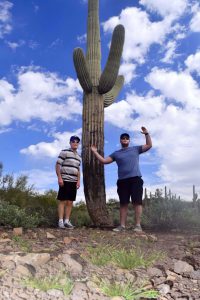 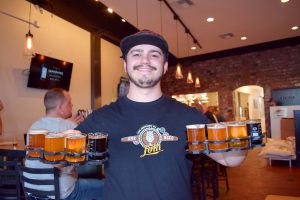 Another day there’s time to swill at three stops on the Arizona Brewery Tour and eat filet mignons at the Valley’s best best steakhouse, The Mining Camp. We stay at the centrally-localted Pointe Hilton Squaw Peak in a two-bedroom two-storey casita where we make time to laze by the pool and share the three-meat platter and prickly-pear cactus margaritas at pool-side Hole-in-the-Wall restaurant. WestJet flies non-stop to Phoenix from Vancouver, Victoria, Kelowna, Calgary, Edmonton, Regina, Saskatoon, Winnipeg and Toronto. Air Canada flies non-stop to Phoenix from Vancouver, Calgary and Toronto. Check out VisitArizona.com. –30–