View from the Infinity pool at our villa 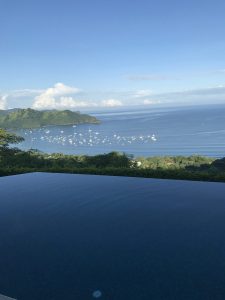 View from the Infinity pool at our villa

When we had a chance to visit the Guanacaste region of Costa Rica, we jumped at the opportunity to stay at a lovely Inspirato Villa and see this unspoiled area of Central America.  The only drawback…..we had to book during rainy season.  After doing some research, we decided to pack for a little bit of everything:  rain, hot sun, humid days, and cooler evenings.  This turned out to be a great strategy.  Even though calling it ‘Rainy Season’ often scares folks off, let me be the first to tell you it should not deter you!

True – it does rain more in Costa Rica in the autumn, but here’s the good news…..it’s super humid there also, so when the rain comes, it just cleans everything up, freshens up the heavy, moist air, and then almost as quick as it arrives, it’s finished!  The sun will be out again shortly – I promise!  And it’s worth the wait….especially under a covered patio with a frosty beverage in your hand. 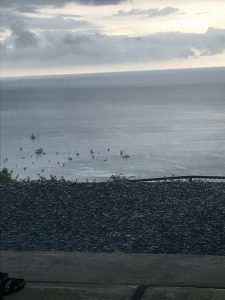 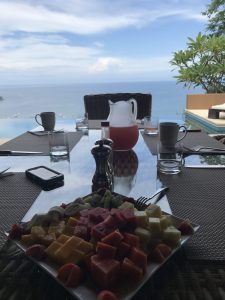 breakfast with a view!

We were situated within an hour of many of the well known spots in this area of CR:  particularly Tamarindo and Playa Hermosa.  In this area, you’ll find an interesting phenomenon:  one beach is white, the next one is black and the next one is brown.  Literally just around the corner and arriving at the next bay, you could see an entirely different color of sand. 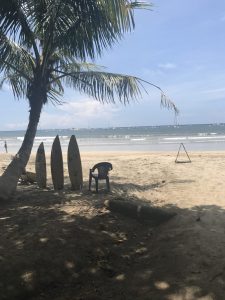 There will be lots to do and see here – especially if you’re up for surfing in Tamarindo, or visiting a nature preserve.  Costa Rica is extremely eco-friendly and in fact, fully 40% of the country is preserved for conservation.  We took a boat tour through one of the nature preserve areas and the number of species we saw was incredible.  I think I lost count. 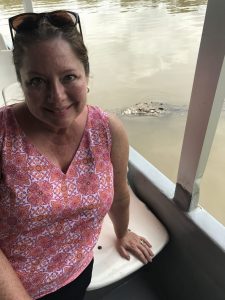 Do I look scared?

Highlights were the howler monkeys, crocodiles, an incredible array of birds and of course, the iguanas (the biggest ones I think I’ve ever seen!) 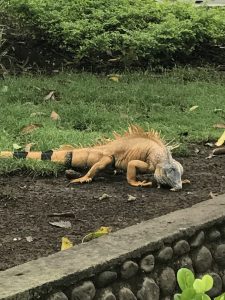 So – while we’re on the topic of creatures and critters…..Costa Rica may not be the place for you if you don’t like bugs, lizards, snakes, etc.  Here’s the thing….you’re in central America, you’re in the tropics, and if you go in rainy season as we did, you’d better be prepared to see interesting things…..  You do need to be cautious.  Our very helpful concierge gave us the ‘crawly things’ talk on day 1, and thank goodness she did. 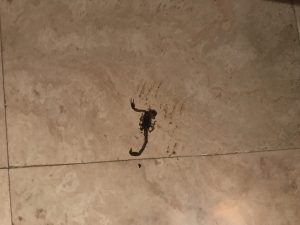 And a big hairy tarantula would have probably resulted in a one-way ticket home….so I was pretty excited about NOT encountering one of those.  But geckos are great fun to watch, and they take care of a lot of bugs, which is why I never mind having those little guys around!

But – let’s talk about howler monkeys.  They’re in the trees around the area, but relatively harmless.  They might snag something if you leave it out on the patio, so I recommend you don’t leave your iPad on the patio table……which happened to our friend who had to stare that monkey down until he eventually dropped it.    These howler monkeys make the most hair-raising sound, and in spite of their name, I’d describe it more as a bark than a howl….but either way, it sounds like there’s a murder happening nearby.  The good news is that they aren’t interested in you…..they’re vegetarians.  Whew. 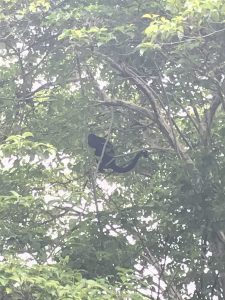 Now that I’ve scared the daylights out of anyone not a fan of truly living in the midst of all this ‘crawling nature’ – I have to say it’s still a great place to check out and I would actually recommend the rainy season for a few reasons:  Flights and accommodations are much less expensive, it’s not crowded and the rain truly is fun to watch and doesn’t last long.

Costa Rica isn’t really known for its food, but we found a few ‘sodas’ (not a soft drink).  A Soda serves what is known as “typico” or the typical Costa Rica cuisine. The basic plate is called a “casado” which literally translates to “marriage”, and so it is. There is a “marriage” of rice, beans, a salad (usually with a base of cabbage) and then a meat of some kind.   Another great option is street food – often served up right on the beach. 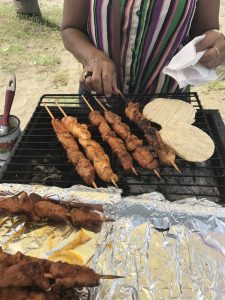 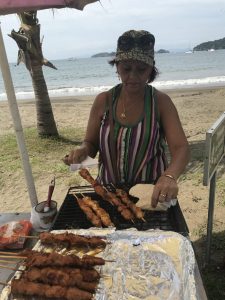 Beyond that, there are a few finer dining options in the area, but since we love to cook, we preferred to do our own meals at the villa.  Groceries are fairly expensive here, but because you’ve probably saved on your trip, it evens out.

We flew into Liberia, and the airport is quite efficient.  We rented a vehicle (pretty much a must) that was a larger SUV because we had 3 couples on the trip.  The roads in Costa Rica are a bit dicey, so having a 4 wheel drive is helpful in some spots.