In the mood for a little forest bathing, my wife, Kerry, and I make  a beeline for Mount Erskine Provincial Park in British Columbia, Canada.  Truth be told, we really didn’t even know what forest bathing was until five minutes earlier. 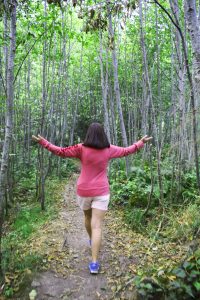 That’s when Janet Clouston, executive director of the Salt Spring  Island Chamber of Commerce, told us this Gulf Island between mainland British Columbia and Vancouver Island was famous for it.

“Not to get too weird on you, but being in the forest affects you on a cellular level,” she said.  “You just feel good.  But you also get your immune system boosted  from the antibiotic and antibacterial properties in the air.”

This trippy sentiment is further popularized in the best-selling book, The Hidden Life of Trees.
The nature-starved Japanese coined the term forest bathing to  reflect how they soak up positivity while spending time in the woods.  And Salt Spring has capitalized on the phenomena by marketing itself as the perfect forest bathing destination for greenery-seeking Japanese.  However, since the majority of tourists to Salt Spring are Canadians, Americans and Europeans, other cultures are catching onto this pastime.

Not that people haven’t been trekking and hiking in the woods for thousands of years, out of necessity and for recreation.  But now it has a catchy new moniker.  Choosing to do our forest bathing on Mount Erskine is double-whammy  fun.
We soak in the filtered sunlight along the Juniper loop trail, benefitting from both the exercise and the positive ions. 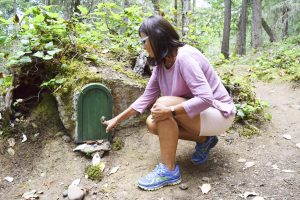 Plus, we come across whimsical little fairy doors along the way  built into rock outcroppings and tree trunks.  Fairy doors are another of Salt Spring Island’s claims to fame.  No one knows exactly how the doors came to be, but they are a heck  of a tourist attraction for children and adults alike.  There’s sport in spotting the doors, wonder in reveling in the myths of forest nymphs and elves and good luck to be had making a  wish on the door step or leaving a little gift or note.

One persistent girl, or woman, named Lola left a note at each one of the five Mount Erskine fairy doors, announcing her name and asking to meet a fairy one day.  Salt Spring is known as being off-beat, hippie, artsy, laid-back,  recreational, culinary, eco-friendly, luxurious and scenic.

As such, Kerry and I endevour to experience it all.  We eat Pacific halibut fish tacos on the harbourside patio of  Oystercatcher restaurant in the heart of Salt Spring’s main village, Ganges. 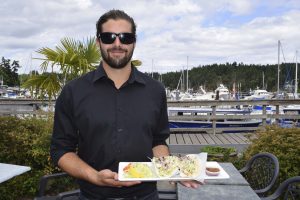 We sample the vintages at Salt Spring Vineyards and Garry Oaks Winery. 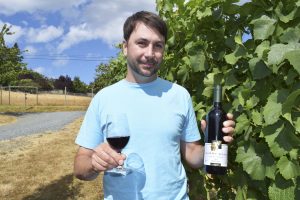 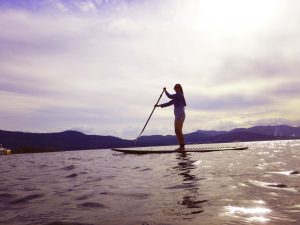 We pat goats and feast on cheese and ice cream made with their milk  at Salt Spring Island Cheese Co. 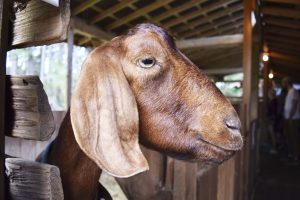 And we canoe on Bullock Lake in front of our serene rented accommodation at The Cottages on Salt Spring Island. 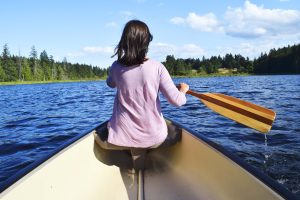 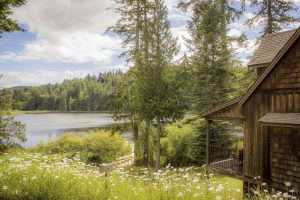 The 50 West Coast weathered cedar-style cottages in the development are for sale for prices ranging from $379,000 to $650,000, Canadian, but there are enough in the rental pool that you can also book them nightly from $240.

Get to Salt Spring Island via ferry from either Vancouver or  Victoria or take a float plane from Vancouver Harbour or Vancouver  International Airport’s seaplane terminal.