Ride a Mini Cooper in the Windy City for the best skyline  views.

Without hesitation, Rey Rosales declares the view of Chicago is best
from Adler Planetarium.

So, we all pile into the Mini Cooper to drive southeast through  Chicago’s famous skyscraper-choked downtown. 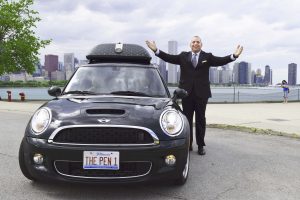 We pull up at the planetarium psyched to look back across shimmering
Lake Michigan’s Monroe Harbour to the Windy City’s unmistakable skyline.
Far left is tall, dark and handsome, 110-storey Willis Tower (the
former Sears Tower and formerly the world’s tallest building) and far
right is Chicago’s second-tallest structure, the 100-storey John
Hancock building.
In between, are hundreds of other highrises making up a dense urban
scene bisected by the Chicago River before it spills into ocean-like
Lake Michigan.
We hop out of the Mini, gasp, snap photos, take selfies and stroll the grassy embankment. 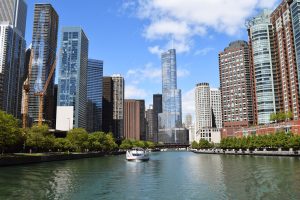 In fact, we won’t even enter the planetarium.
In the late-afternoon partial-sunshine we’re more interested in
Chicago’s terrestrial wow factor than viewing the universe’s
extraterrestrial endowments in the planetarium.
My wife and I, our tour guide and friend, Joanne Guthrie-Gard, and
driver Rey arrived at this Chicago juncture thanks to The Peninsula
Hotel’s new Keys to the City program.
Keys gives guest of The Peninsula the opportunity to experience 10
line-by-passing and unique activities from a helicopter tour and tastings at a Michelin-starred restaurant to

a chauffeured tour by Mini and exclusive access to the Chicago Architecture Foundation’s First
Lady Cruises to ride the Chicago River through the city’s highrise canyon.
We chose the Mini and First Lady outings to keep our skyscraper theme intact.

Joanne popping up in this is a story unto itself.
She and my wife, Kerry, started as pen pals at age 12 when Joanne was a Chicago schoolgirl and Kerry 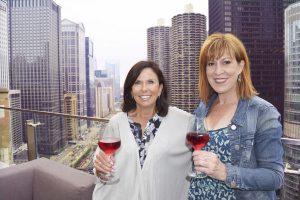 Joanne’s mom and Kerry’s dad both worked for Motorola, albeit half a
world apart, and had the inspired idea for the girls to begin a
transatlantic correspondence.
In 1979, at age 16, Joanne visited Kerry in Yorkshire and next summer
Kerry flew to Chicago to complete the ultimate pen pal exchange.
They eventually lost touch, but reconnected four years ago on Facebook.
Joanne is an executive assistant at giant consulting firm McKinsey,
but also volunteers as a Choose Chicago Greeter guide on weekends to
show small groups the city she’s passionate about.

When Kerry and I decided we needed a Chicago fix, Joanne was the first person we Facebooked.
When they meet up again in the lobby of The Peninsula, it’s a reunion 37 years in the making.
Touring with Joanne provides a glimpse of not just the city’s biggest hits, like Riverwalk,

The Bean sculpture and authentic deep-dish pizza, but insider Chicago, like rooftop bars at the LondonHouse
Hotel and Cindy’s at the Chicago Athletic Association Hotel. 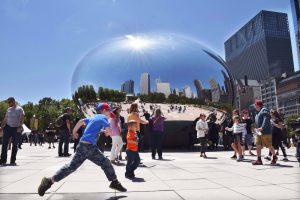 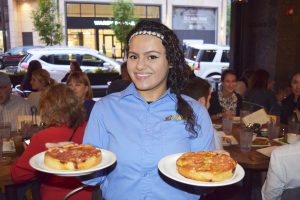 Staying at the newly-renovated Peninsula on Chicago’s famous
Magnificent Mile rounds out the experience. 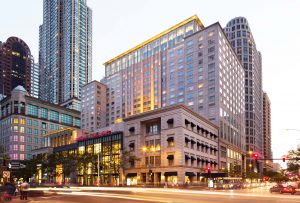 The mantra of the Hong Kong-based Peninsula chain for its Chicago
property is Midwestern hospitality meets Asian graciousness.
And it delivers on all fronts, whether it’s the comfort of the
combination Lake Michigan and Chinese flowers decor in the elegantly-
comfortable rooms or the high-tech automation of rooms where
everything is controlled from wall-mounted touchpads, instead of
light switches, and bedside iPads. 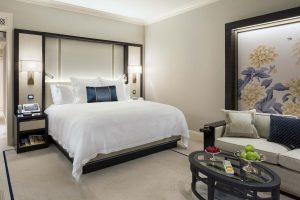 The Shanghai Terrace restaurant on the fifth floor of The Peninsula
also delivers with an elegant meal of Peking Duck with views over the
Magnificent Mile.
Check out Peninsula.com.