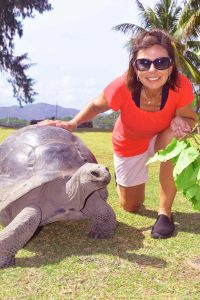 Tyson stretches his wrinkly, 120-year-old neck as an invitation to stroke it.  It feels much like it looks: dry and leathery,

yet utterly wonderful.  Tyson is a rare Aldabra giant land tortoise and me and my wife,   Kerry, are meeting this gentle

giant in his natural habitat, the endlessly exotic Seychelles, the string of 115 islands in the Indian Ocean off the northern

We’re on tiny Curieuse, in the Seychelles’ Inner Islands, where these tortoises roam, albeit slowly, in a national park.
It’s the largest concentration of such reptiles in the world.  There are 300 in all, from the tiny hatchlings in the

nursery to the half-ton, 150-year-old rough-shelled male, the oldest being on earth. Tyson can eat the grass and

low-lying vegetation he can reach anytime.  That’s why, when tourists arrive with sea hibiscus leaves, plucked
from high branches, he gets as excited as a century-old, lumbering senior can get.  He accepts the offered leaves,

one by one, gratefully, chews methodically and extends his neck for a pat and another mouthful of sea hibiscus.

We’re awed to be hanging out with such a cool, old dude in such an insanely beautiful setting. 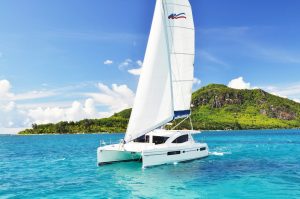 The arrival at Curieuse was also extraordinary.  My wife and I have hired a 40-foot catamaran called Kosinathi, which  translated from South African is king.

It’s from Moorings, the company with boat rentals in all the world’s
sailing hotspots from the Caribbean and the Mediterranean to Thailand and these spectacular Seychelles.

We’ve also hired Hybert Hortence, a chill, dreadlocked Seychellois to be our captain for the week.  That way, we can have all the fun and he can do all the sailing. 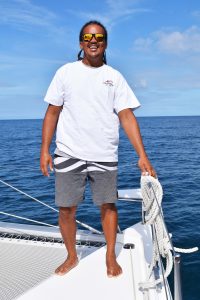 He’ll also ferry us to and from shore in the  dingy for experiences like feeding Tyson, lounging on deserted beaches and seeking out restaurants that serve

the nation dish of octopus curry.  After all, the Seychelles are the former English and French islands with African

proximity and Indian influences, all packaged into a remote and unique Creole melting pot. 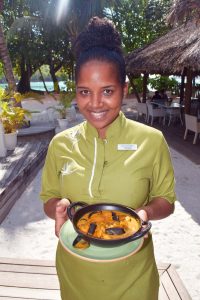 The catamaran has four cabins, so we could easily have invited two other couples to join us.  But we’re selfish.

besides pleasure seeking.  Hybert stops whenever we want, anchors and takes us by dingy, or lets us swim,

snorkel or kayak, to the most incredible deserted stretches of sand with French names like Anse Lazio and 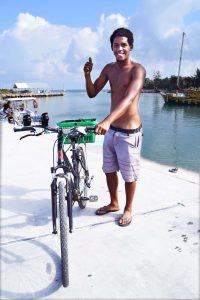 On La Digue island, we’ll have to rent bikes and peddle to Anse Source D’Argent, the reef-protected

beach accessible only by cycle and foot.  It also happens to be ranked by National Geographic as the best beach
in the world.  It’s not just white-sand eye candy fronted by emerald waters, but it has the geographic interest

Once, on La Digue, to cycle as far as we can uphill toward Belle Vue, before we have to abandon the bikes and

continue on foot for the panoramic view of the entire west coast of the island.

The other time, on Praslin island, we catch the bus in Baie Sainte Anne to the Vallee de Mai, the so-called

Garden of Eden, where the palm forest is primeval and supersized. 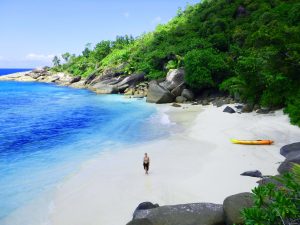 It also home to the Coco de Mer, the palm that produces a double-coconut resembling a life-size female pelvis.

There are lots of examples of the unique coconut that elicit giggling, pointing and whispering, especially when

displayed alongside the giant phallic appendage that grows on the male palm.  While we revelled in all the activity,

we were also enthralled to simply zone out on the front net of the catamaran.  With the sails flapping, the turquoise

ocean below and the cloud-smattered azure sky above, it’s the perfect way to view the world at seven knots.

After a connection in Addis Ababa, Ethiopian flies onto  Seychelles’ main island of Mahe, where Moorings’ marina is, in three-
and-a-half hours.