Not a religious nor superstitious man, Ilija Pajovic nevertheless puts his hand on the Madonna rock behind the church’s altar and makes a wish.
Two months later, his wife is pregnant with the son they’ve longed for for eight years.
“I’m just saying, it seems like a miracle to me,” said Pajovic.
“You can see for yourself.”
So, my wife, Kerry, and I pile into Pajovic’s 22-foot Quicksilver speedboat and race off to Our Lady of the Rocks, a small man-made island in the sparkling Bay of Kotor, just north of Montenegro’s capital of Kotor. 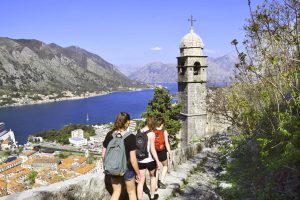 The island is home to the Catholic Church of Our Lady of the Rocks, where the altar is set so close to the wall we can only squeeze behind it single file.
The Madonna rock is set in the middle of the altar’s back and can be touched only by crouching and sticking your hand in the small opening.
Pajovic shines the flashlight from his cellphone so we can navigate and tells us to make a wish.
In our 50s with two grown-up kids, my wife and I certainly don’t want to conceive a baby, so we wish for health and happiness for our family.
We check out some of the 68 paintings in the tiny church by 17th Century Baroque artist Tripo Kokolja and then return outside to the sunshine to hear the tale of the island from Pajovic.
After some local sailors found the icon of Madonna and Child on a rock in the bay on July 22, 1452, they and everyone else who passed the site in a boat would add a rock as a homage and thanks for safe voyage. 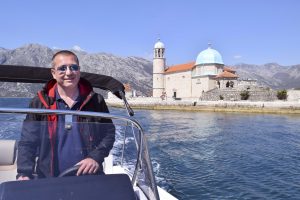 Eventually an island emerged from the sea, a church was built on it and the original Madonna rock was installed in the altar.
The tradition of hurling rocks into the water at the site continues every year on the anniversary of the discovery, July 22, with a festival called Fasinada.
Pajovic hangs out everyday in Kotor’s City Park with his boat offering 90-minute jaunts to the island for 60 Euros through Montenegro Submarine & Speedboat Tours.
It’s certainly handy he has a miracle connection to the country’s top tourist attraction.
But we don’t doubt.
Pajovic seems straight-up and he shows us a photo of his son, Luca, now aged four, on his phone.
My wife and I arrived in Kotor aboard the new luxury cruise ship Viking Sky. 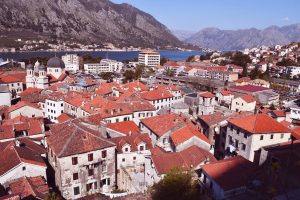 Kotor is relatively new at hosting cruise ship passengers, but it’s quickly becoming a coveted Balkan port sandwiched between Croatia and Bosnia & Herzegovina to the north and Albania to the south.
The capital is spectacularly set at the end of a 30-kilometre-long inlet, considered Europe’s southernmost fjord, that links to the Adriatic Sea.
Towering limestone cliffs back each side of the fjord and the city of Kotor is nestled on the east incline, an expanse of red terracotta roofs behind a UNESCO World Heritage Site wall that dates back to 1420.
With only a day in this wondrous locale we make the most of it.
Besides motoring to Our Lady of the Rocks with Pajovic, we vow to climb the 1,355 steps along the city wall to the mountaintop St. John’s Fortress.
But the day is hot and the steps steep, so we make it only half-way to the 1518-era Church of Our Lady of Remedy, where an enterprising woman is selling cold water. 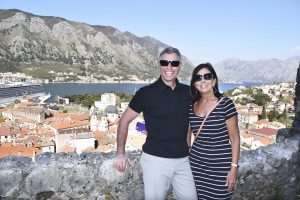 On the way down, we meet some tourists who did make it to the top and comment a vendor there rewarded them with beer.
We momentarily feel bummed until we realize we’ll shortly be back in the city and can sip excellent Montenegro Crnogorski rose wine at alfresco Luna Rossa with the charcuterie and salad we order. 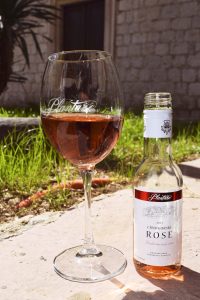 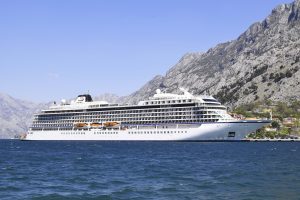 The Viking Sky’s Empires of the Mediterranean cruise from Athens to Venice will also take us to the Greek islands of Santorini and Corfu, Dubrovnik and Koper, Slovenia.
Viking may have gotten its start with river cruises plying Europe’s network of inland waterways, but it has now taken the ocean by storm with three elegant mid-sized, 930-passenger ships and three more ships to come later this year and next.
All staterooms have balconies, there’s an infinity pool on the aft deck and the semi-all-inclusive set up means meals and snacks at the buffet, main dining room and speciality restaurants are included with beer and wine at lunch and dinner and one excursion in every port is also included.
Check out Viking Cruises