Staying at a Palace in Venice

To infinity and beyond…

Staying at a Palace in Venice

Channeling our inner George and Amal Clooney, my wife and I glide over Venice’s lagoon on a sleek private water taxi.  As we pass the mouth of the Grand Canal, the domes of the resplendent Basilica in the pigeon-filled, cafe-lined San Marco Piazza come into view.
The crowd is thick mid-morning on the Riva Degli Schiavoni, the floating city’s main waterfront promenade.  However, we avoid the throng by slipping into the Rio del Vin and under the stone Ponte del Vin with its ornate balustrade.  It’s so romantic this canal and bridge carry the vin name after the boats transporting wine that used to anchor here.
My wife and I aren’t delivering wine, but we are making an entrance at one of Venice’s most famous and luxurious hotels – The Danieli.
The former palace of the 14th-century Doge Andrea Dandolo fronts the Riva Degli Schiavoni and has a dock at its side door to receive guests arriving by boat. 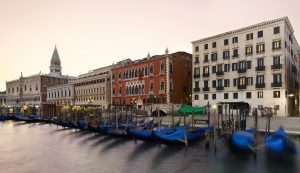 My wife and I can’t help but feel glamorous making such an arrival.
As the water taxi is tied up by our driver Matthew, a Danieli doorman dressed in tails greets us, gives us a hand onto the jetty and retrieves our luggage. 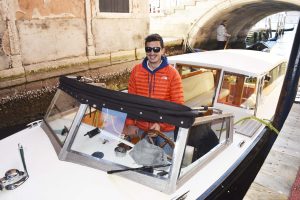 Naturally, our thoughts wander to Oscar-winning actor George and high-profile human rights lawyer Amal, who famously wed in Venice in 2014.  The power couple, and all their guests, arrived at the canal-front hotel where they exchanged vows, in gleaming wooden private water taxis.
My wife and I floated into Venice after a 10-day Empires of the Mediterranean cruise aboard the Viking Sky, visiting Greek isles, Croatian ports and Slovenia.
Of course, we could have taken the cheaper public transportation water bus from where the ship docked at the cruise terminal to the water bus station on the Riva Degli Schiavoni.  But what fun would that have been?
We’d have missed out on our George-and-Amal moment and forgone the extravagance of a water taxi landing.
So, in keeping with the indulgence that started on the cruise, we hired our own water taxi. 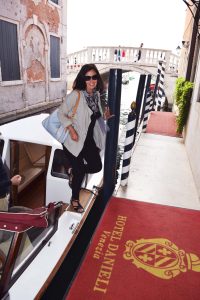 The interior of the 210-room Danieli is everything you’d imagine the former palace of the leader of the most serene Republic of Venice to be.
The lobby is the four-storey marbled and pillared enclosed courtyard of the palace.
The lighting is deliberately glowing like 14th Century candlelight.
We meet Danieli marketing executive Francesco Ripa who ushers us around the original palace core of the hotel as well as the 19th and 20th Century palazzo additions connected by second-floor bridges. 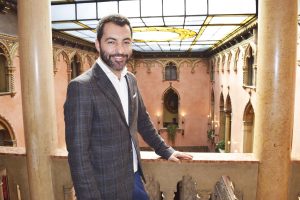 There’s chat of the hotel being featured in the movies Moonraker, the 1979 James Bond flick starring Roger Moore, and 2010’s The Tourist with Angelina Jolie and Johnny Depp.
The former palace is also the setting of many a sparked romances and trysts, including the scandalous 1950s pairing of Greek shipping magnate Aristotel Onassis and opera singer Maria Callas, who would be later dropped in favour of Jackie Kennedy.
The rooftop Terrazzo restaurant has the best view in the city over the lagoon, promenade, Grand Canal and Basilica.
Although we won’t sleep there, my wife and I are given a peek inside the 12,000-euro-a-night Doge Dandolo Royal Suite, which was the original private apartment of the 14th Century doge. 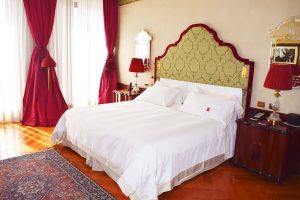 As expected, it’s aristocratic Italian Gothic at its best from the over-the-top decor by French designer Pierre Yves Rochon to the fresco ceiling above the bed in the master’s chambers by Venetian painter Jacopo Guarana.
We are then shown to our quarters, a luxury lagoon-view room with balcony.
While the doge never slept there, it is sumptuous with its high ceilings, crown mouldings, upholstered walls, marble bathroom, king-size bed and French doors to two wrought-iron balconies overlooking the Riva Degli Schiavoni and lagoon.
It’s a scene that screams drink-prosecco-and-soak-in-all-that-is-wonderful-about-Venice. 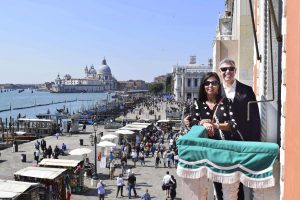 Which is exactly what we do before dressing up, wandering Venice’s tangle of pedestrian alleys and canals and stopping for more prosecco and pasta.
Then its back to the Danieli for slumber befitting a doge and his dogaressa.
The Hotel Danieli is part of The Marriott International’s Luxury Collection.