Avoid the traffic – ride in style!
By Steve MacNaull

Like an ancient Khmer king and queen, my wife and I climb atop the elephant. We settle into a cushioned red velvet seat for two on To’s back, which is draped in a bright-red robe, just behind our elephant handler, Woo, who is also sporting a sharp red uniform. 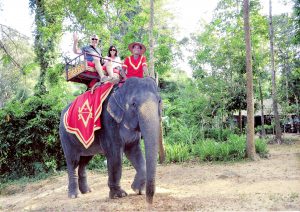 Forget the fact To has just pooped on the trail, this will be a regal ride high into the Cambodian jungle to catch a peek-a-boo view of the country’s biggest tourist attraction – Angkor Wat. Just a glimpse of the ruins of the 12 Century temple is all we need. We’d fought the crowds and heat the day before at the UNESCO World Heritage Site and are looking for a reprieve. Ascending ever higher on the quiet and shaded jungle path fits the bill. While we imagine the hordes traipsing through Angkor Wat, we congratulate ourselves on choosing this pacaderm pleasure. Don’t get me wrong, Angkor Wat is a sight to behold. It’s one of the seven man-made wonders of the world, it’s the largest religious building on Earth and a pilgrimage for every Khmer (Cambodian) and bucket-list tourist.

We’re glad we circled its five towers, climbed the tallest central tower and received blessings from Buddhist priests the day before. By the way, it took 4,000 elephants, 6,500 engineers and 70,000 labourers almost four decades to build impressive Angkor Wat. But today is about alternative Angkor via elephant. 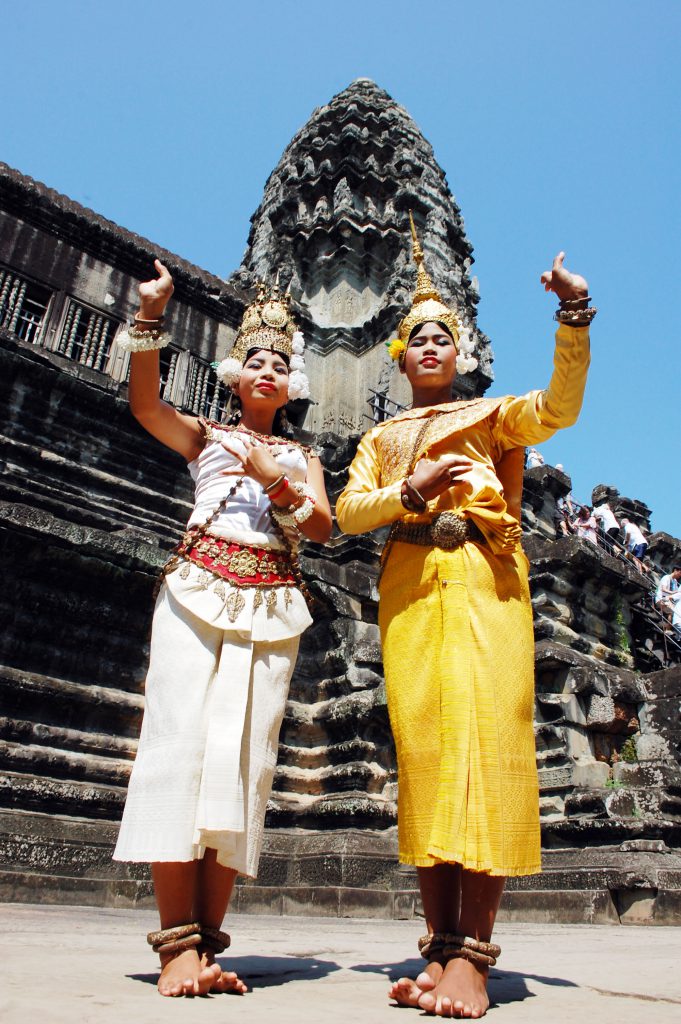 The concierge at our hotel, the luxurious Sofitel Angkor Phokeethra Resort, told us about the elephants and we signed up immediately. A tuk-tuk, that wonderous open-air buggy attached to a motorcycle, picks us up at the hotel and whisks us off to the elephants. We first make friends with To, a three-ton, 35-year-old female, by feeding her a coconut, one of her favourite foods right up there with pineapple and sugar cane. She gently takes the coconut out of our hands with her trunk and then swiftly and surely cracks it with one mighty snap of her jaw, chews and swallows it in two bites. With the introductions over, we climb a set of stairs and settle onto her back. Being a former French colony, Cambodia still has a lot of Franco influence.

The elephant rides are run by French non-profit Compagnie Des Elephants D’Angkor. Besides offering tourists 30-minute jungle rides for $40 each, Compagnie’s mission is conserving the welfare of Cambodia’s remaining domestic elephants. Thus the elephants are treated well and work a reduced schedule of five jungle rides a day. Those facts are important to my wife and I because we certainly didn’t want to be party to any kind of elephant exploitation. But the day wasn’t just about elephants. We also fed bananas to the fearless Macaque monkeys who love to crawl all over temples. In the nearby city of Siem Reap there’s every diversion to cater to the millions of tourists who descend on the region annually to take in Angkor Wat. In keeping with my wife and I’s Khmer aristocracy theme, we try the Four-Hand Royal Khmer massage at Oriental Princess Spa.

As the name suggests, we each had two therapists, thus four hands, work on us. Jury is still out because it felt like a cross between a rough rub down and a chiropractic treatment. We also take in the Night Market to buy souvenirs we don’t need and stick our feet in a tankful of hungry fish so they can nibble at the dead skin and leave us with soft and smooth tootsies. Our three days at Angkor Wat, Siem Reap and the Sofitel resort is part of the 15-day Viking Mekong river cruise-tour through Vietnam and Cambodia. The trip includes a seven-day cruise, three days at Siem Reap and two days each in the Vietnamese metropolises of Ho Chi Mihn City and Hanoi. Check out Compagnie De Elephants D’Angkor’s Facebook page and VikingRiverCruises.com.