As soon as Huy sees our boat he breaks into a dead run. His bare feet slap on the packed-dirt path along the Mekong River, keeping pace with the sampan my wife and I and 20 other tourists are motoring along in. By the time we pull up on the riverbank 200 metres ahead, 11-year-old Huy is there to greet us, not even out of breath. 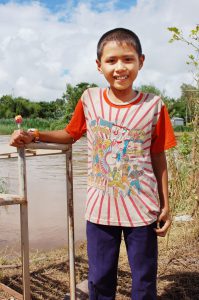 He speaks hardly any English, but there’s a big smile, a gracious nod and loud hell-o, broken into two exaggerated syllables. “He’s the smartest boy in Vinh Hoa village,” says our guide Thu Tram. “He knows if he is first here he will get the most candy. But please save some of the candy for the other children.” And there will certainly be other children. As soon as word spreads of our arrival, there’s a small group of kids, all smiling, all motioning for us to come see their village and all, of course, hoping for candy. We are on an excursion from the Viking River Cruises’ Magnificent Mekong itinerary in Vietnam, and the cruise line has provided us with candy to hand out. With the children leading the way sucking on lollipops, we follow the trail into Vinh Hoa. It’s bordered by turnip, chili and corn fields, the crops villagers cultivate to take to the nearby floating and town markets to make a living. In the village, everyone has come down from their riverfront wood and sheet-metal homes on stilts to the trail’s edge to wave and say hell-o. The odd cow wanders by; chickens scurry about; we pass the cafe, which is little more than a few plastic tables and chairs under a tarp; and we come across the mobile store, which is just a women on a bike with baskets of fresh fish and vegetables for sale. We are invited into the home of village elder Nam Nguyen. It too is on stilts to keep above the seasonal flood waters of the Mekong and provide a cool space underneath during the hot, dry season to do everything from lay in a hammock and keep your cow to watch the kids play and fix a motorcycle. It’s just three rooms, a big open living space in the front, a room in the back for sleeping and a kitchen with cooking fire. Vietnam is a third world country and these people are impoverished farmers and fishers. We feel a bit voyeuristic, peeking into his scene gape mouthed. But the people eat healthy and are happy. They don’t want our pity or our charity. They just want to show us their beautiful country and say hell-o. 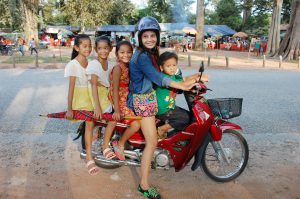 There will be many more eye-opening and beautiful moments on this 15-day Magnificent Mekong Viking cruise-tour. Best know for its fleet of luxury longships plying Europe’s elegant rivers, Viking has just the one riverboat in Southeast Asia, the Viking Mekong. It carries only 58 passengers in French colonial style. Before sailing for a week there’s two days in Ho Chi Mihn City, Vietnam, formerly Saigon, to take in the cacophony of a metropolis with 10 million people and five million motorcycles.
On the Mekong we glide from My Tho in southern Vietnam, to Sa Dec and Tan Chau before crossing into Cambodia and sailing to capital of Phnom Pehn then Kampong Cham and Udon. 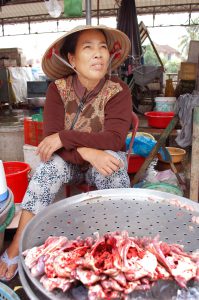 Daily we come onto land to check out markets that sell delicacies such as rat, snake and grasshopper; wander through the mansion where the 1992 French movie The Lover was shot; ride in rickshaws, tuk-tuks and ox carts; visit the Royal Palace in Phnom Pehn; receive a white jasmine flower blessing from a monk at the Udon Buddhist Monastery; and play volleyball with kids at the Kampong Cham Orphanage. After the cruise there’s a five-hour bus ride to Siem Reap, the gateway to Angkor Wat, to wander the grounds of the UNESCO World Heritage Site 12th Century Khmer temple and even take an elephant ride high into the jungle for another view of one of the seven man-made wonders of the world.

Then there’s a short flight to Hanoi, the Vietnam’s capital where French colonialism and modern Asian metropolis meet. To get to Vietnam we flew Vancouver-Seoul on Air Canada’s new comfortable and energy-efficient Boeing 787 Dreamliner and connected to Ho Chi Mihn on Star Alliance partner, Asiana Airlines. On the way back we flew, Hanoi-Seoul-Vancouver, treated to Dreamliner’s decadent business class. Check out VikingRiverCruises.com and AirCanada.com.