Just as our tour bus pulls up to the famous Badling section of the Great Wall of China outside of Beijing, it starts to rain.

My son and I resign ourselves to getting soaked and strike out to do the bucket list thing of climbing this 2,000-year-old spectacle of walkways, battlements and watchtowers.

Despite the downpour, the crowds are thick. 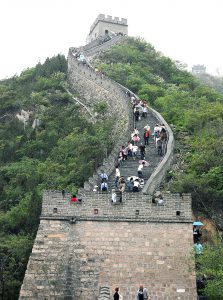 Every foreign tourist is here to experience the wall, drenched or not.

To outpace the throngs, my son and I climb ever and ever higher.

By the time we’ve ascended 300-or-so step, the hordes have thinned, the thighs protest and breath comes in ragged bursts.

We stop and drink in the vista of endlessly snaking wall disappearing into the mountains, forest and mist.

Descending the steps ends up being more difficult.

Uneven, with a pitch higher than normal stairs it takes not just concentration, but additional leg work and balance.

On the way down we saw more than one person who had stumbled and left with scraped knees or bloody nose.

“If you haven’t climbed the Great Wall you haven’t been to China,” says Jacky Lee, the guide on the full-day Gray Line Tour we took.

The wall is one of the Seven Wonders of the World.

It started to take shape as long ago as 224 BC, when sections of defense structures were joined together to keep out invading Mongolians.

At its longest the super-structure rambled 15,000 kilometers along the northern front of the ancient Chinese kingdom. 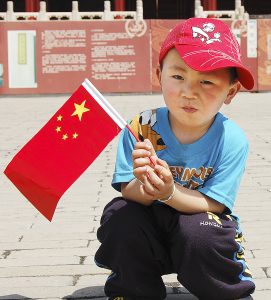 Back in Beijing we want to see what makes this megatropolis of 17 million, which has been the Chinese capital in one form or another for 2,500 years, tick.

So via the subway, on foot, in taxis and even motorcycle rickshaw, we experience the city’s greatest hits from Forbidden City and Tiananmen Square to a string of venues leftover from the 2008 Summer Olympics and the best Peking duck restaurant.

You have to take a rickshaw at least once in Beijing for the exhilarating street-level open air ride of honking horns and weaving in an out of traffic.

It’s funny how we’d never jump aboard a ramshackle vehicle at home to drive at dangerous speeds with no seatbelts, but on holiday it’s the thing to do.

Beijing may have changed its name from Peking, but the moist duck with crispy skin maintains the historic name.

Order the specialty at Da Dong and the table is presented with a perfectly roasted bird that is carved in front of you and served with crepes, sauce, slivered onions and cucumber and sugar.

You dip the crispy skin in the sugar for a tasty treat and fold the juicy meat in the crepes with sauce, onion and cucumber.

It looked easy when our waitress deftly handled the chop sticks to make up our first neat little parcels.

Our subsequent attempts were messy, but fun to assemble and delicious to eat nonetheless.

Tiananmen is the biggest public plaza in the world and crowded day and night, especially for the flag-raising and lowering ceremonies at dawn and dusk. 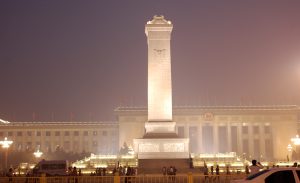 We caught the spectacle at dusk, complete with marching soldiers, and commented on the bewitching twilight.

We were told it wasn’t a lighting effect, but the remnants of the sunlight in smog.

Yes, smog is a real concern in Beijing, but city officials blame it on pollution floating in from other cities and regions.

Rain – like the rain we got during our climb of the Great Wall – tends to wash away the smog and clear skies for a few days.

Forbidden City is the square kilometer of ancient imperial splendor surrounded by a moat that’s smack dab in the centre of modern Beijing. 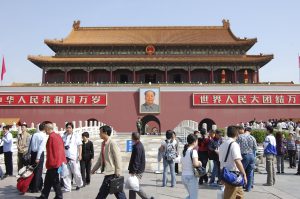 It took one million laborers from 1406-20 to build the Forbidden City’s 800 buildings, huge plazas and imperial gardens.

Twenty-four Chinese emperors, their families and courtesans lived there until the early 1900s.

It is so named because commoners were forbidden to enter the royal place for 500 years.

Now commoners visit by the millions to see the greatest examples of ancient Chinese architecture and all the royal artifacts.