By Steve MacNaull I’d seen pictures, but nothing prepared me for my first real glimpse of Hong Kong’s Giant Buddha. Suddenly as the tour bus rounded a steep corner, wow, there was the Tian Tan Buddha statue in all his 85-foot, 255 tonne bronze glory. 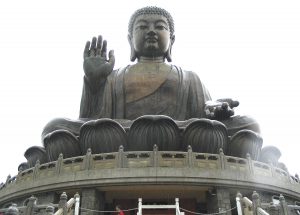 “The Giant Buddha (as Tian Tan is commonly referred) is definitely one of Hong Kong’s biggest tourist attractions,” says Kevin Ng, the marketing manager of the well-located Luxe Manor Hotel where me and my wife stayed during a visit to the city. “He’s right up there with Victoria Peak, the city itself, the markets and shopping and pink dolphins as why people come to Hong Kong.” The Giant Buddha was part of the day-long tour of Lantau Island that started with a ferry ride and a visit to beautiful Cheung Sha Beach. While Hong Kong is best known for its incredible density of people and skyscrapers ringing Victoria Harbour, there are parts of the region that are untouched. Lantau Island is a mountainous jungle with wild water buffalo, deer and leopard cats, hiking trails and beaches. The Giant Buddha sits atop Lantau’s highest peak at 1,600 feet in the Po Lin Buddhist Monastery. A long stretch of 260 steps leads up to the Giant Buddha’s base and if you put coins in the outstretched hands of the smaller statues along the stairs it’s said to bring good luck. The tour also includes an hour in the fishing village Tia O made up of ramshackle homes built onstilts over the water. This is where primitive China meets modern China. The shacks are makeshift wood and metal sheeting and have no plumbing, yet electricity has been strung to them so residents can have TV and computers. Tia O is also home to a market of the most fascinating, and foul, things. The air is pungent with wafts of shrimp paste, dried fish bladder, salted duck egg yolks, seahorses and live fish of every shape, size and colour. Locals buy the goods not just as food, but for medicine and as an aphrodisiac. Another Kong Kong highlight happened quite by accident. During a pre-dinner drink at Sky Lounge on the 18th floor of the Sheraton Hotel we were treated to a laser and strobe light show from highrises on both the Hong Kong Island and Kowloon sides of the harbour. We later found out it’s called the Symphony of Lights and it happens every night at 8 p.m. with 43 buildings participating and piping the accompanying music through their properties. In fact, the Symphony is in the Guinness Book of World Records at the largest permanent light and sound show. Gray Line’s Hong Kong Island Deluxe Tour is worthwhile because it gives an overview of the metropolis of seven million. The first stop is the Man Mo Temple representing China’s other main religion, Taoism. Donate a few Hong Kong dollars and light a cluster of three incense sticks representing good luck in your past, present and future. Victoria Peak is then on par with the wow factor that the Giant Buddha provided. The 1,650 foot pinnacle is reached by taking a 10 minute tram ride, initially through highrises and then through hillside jungle. At the top is the most outstanding view of the skyline, Victoria Harbour and the outer islands. 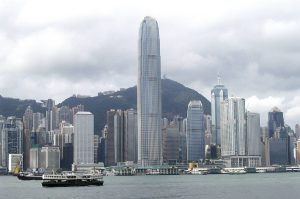 Walking through the city is again a study in contrasts. Caucasian and Chinese people in business suits rush around the financial district and in and out of designer boutiques, while blocks away residents dry their laundry on bamboo sticks jutting out of windows in rundownhighrises and smelly food markets line the streets.The tour also featured stops at the Aberdeen Fishing Village where 8,000 people live in haphazard houseboats; Repulse Bay Beach where Hong Kong’s rich and famous play; and Stanley Market with hundreds of stalls of clothes, shoes, jewelry and souvenirs. We were so lucky to spot rare pink dolphins on our Hong Kong Dolphinwatch excursion. In our case we boarded a yacht with 34 Japanese tourists and headed out into the South China Sea to waters favoured by the sub-species of the white humpback porpoise. The creatures are pink, the only place in the world they are, due to a strange combination of blood rushing to their skin as they swim and water pollution. DiscoverHongKong.com