A Michelin Star in Provence

Against every instinct, I lean backward over the cliff, water rushing around my knees in a torrent.
I loosen the winch around my waist and pop down into the waterfall, a vision of white spray and exhilaration.
My 22-year-old son, Alex, and I are on a boys adventure trip on the Hawaiian island of Maui and this is waterfall rappelling 101.
After practicing on a dry cliff, we’re now in the first waterfall, a 12-metre vertical drop in the rainforest.
“This is the real deal,” shouts Rappel Maui guide Joe Shetz over the roar of the water.
“Lean back and let yourself go. Trust yourself. Trust me.”
We do trust Joe.
After all, we have to. 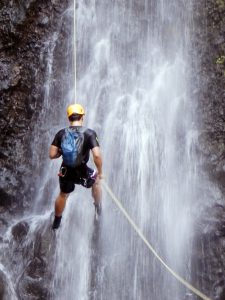 He’s at the bottom of the gush of water holding the safety rope also attached to my waist.
Turns out neither my son nor I need to be saved though.
We follow instructions and essentially walk backwards straight down the waterfall with a few  well-timed bounces just to show off.
We scramble over wet rocks to the top of the next waterfall.
It’s a little shorter, but more technical because it’s really two waterfalls that join into one on a smoother cliff.
The two-for-one effect causes the water to tumble harder and faster, only adding to the blast of dangling at the end of a rope while descending its length.
At the bottom, self-satisfied and adrenalin-charged, we take the chance to truly admire our surroundings.
We’re in the Puohokamok Canyon carved into the side of the inactive Haleakala Volcano, located just off the half-way point of Hana Highway.
It’s a rainforest and the precipitation that pours at the top of the volcano creates rushing creeks that erode into deep canyons and waterfalls where there are cliffs.
We think it’s astoundingly special.
Yet, Rappel Maui has only named the waterfalls No. 1 and 2, in reference the order they are rappelled.
Without my wife and daughter on this trip, my son and I are free to do all the things the girls have made us steer clear of on previous forays to Maui.
As such, we also hurl ourselves down Haleakala Volcano on bikes over 35 kilometres of road with 29 switchbacks, paddle in an outrigger canoe with a bunch of local celebrities, stand up paddle board and still find time to lay by the pool at luxury resorts.
To cycle Haleakala at dawn you have to commit. 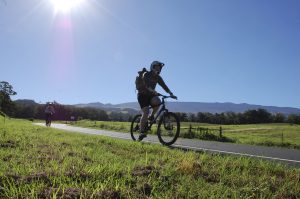 The wake up call at the Maui Coast Hotel, where we are staying in Kihei, jolts us to consciousness at 1:45 a.m.
We drive in the pitch  black in our rented Mustang convertible to the Haleakala Bike Co. meeting point in Haiku at 3 a.m.
Outfitted with helmets, jackets, gloves and bikes, we again strike out in the dark, but this time in a van for an hour-and-a-half climb to 3,000-metre elevation and the crater of the volcano.
At 5:37 a.m. tour guide Ken Likout convinces us to leave the warmth of the van for the chill of the crater, which is 2C at this time of day at this altitude.
“The show is starting,” he says.
And what a show it is. 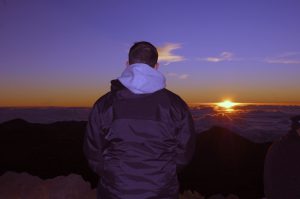 The clouds populating the 1,700-metre deep crater start to illuminate yellow, orange and red as the sun slowly starts to rise, peaking in a show of light that culminates with the 6:17 a.m. dawn.
It’s the kind of spectacle that prompts declarations of love, proposals of marriage and a general awe at the beauty of nature.
But, by 6:30 a.m. we’re ready to bike.
We’re taken by van down to 2,100-metre elevation where we’re reunited with our bikes.
The rules are simple.
The road below is all downhill and features 29 switchbacks through several eco-systems from barren lava rock to pasture.
Use the hydraulic brakes on the hike liberally and enjoy the blast of a ride.
We end up back in Haiku by 10 a.m., amazed at what we’ve accomplished with the day so far.
Air Canada and WestJet fly from Vancouver, Calgary and Edmonton to Maui.
Check out RappelMaui.com, BikeMaui.com, MauiCoastHotel.com, HawaiianPaddleSports.com and VisitMaui.com.