You’d be forgiven for having a stiff neck in Prague.  Thanks to the city’s incredible architecture & stunning beauty,  you’ll be spinning around to gawk in every direction.  The city is filled with colorful baroque buildings, gothic churches and stunning bridges, all watched over by the castle.

Bring your Fitbit too, because this is one of Europe’s most walkable cities and you’ll have no trouble getting in your daily step goal!  We stayed at the lovely Boutique Hotel Golden Key in the castle district and enjoyed retreating to this quiet area at the end of each day.  Prague is a remarkable, ancient city, full of architectural marvels and wonderful culture.  Not an overly religious people (any more), the locals have made great use of the many churches in the city,  repurposing them as music halls.  We attended a concert at the 10th century St. George’s church and the acoustics were astounding. 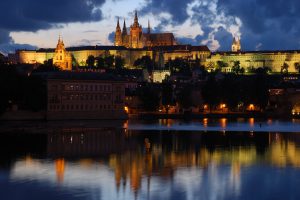 Prague Castle is said to be the biggest in the world, and its history stretches back to the 9th century. Seen from the bridge, it is truly the stuff that fairytales are made of.  You’ll expect to see Cinderella somewhere up there, I guarantee!  Inside the castle walls, St. Vitus Cathedral is the central point and to stand in front of it, gazing up to the top of the imposing towers, is to realize how small you really are.  This gothic masterpiece reflects the whole history of Bohemia and is a must when in Prague, and just one reason this is called the ‘City of a Hundred Spires.” 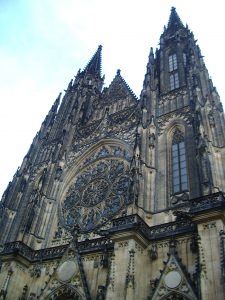 The Charles Bridge (the Vltava River’s most famous and beautiful crossing) is the main pedestrian thoroughfare in the tourist area of Prague, and one of  its 18 bridges.   To stroll it at night, with the lights of Prague and the breathtaking castle in the distance, would truly give Paris a run for her money in the ‘romantic places’ department.  While on the bridge one evening, we even saw a nervously excited young man drop to one knee and propose to his girlfriend (she said yes – cue the orchestra!)  Prague even has a smaller version of the Eiffel Tower on a hilltop nearby, about a half hour’s walk.  The Petrin Lookout Tower was built in 1891 and you can even ride the funicular railway for a more relaxing visit.

All that walking around Prague is sure to work up an appetite, and the city has no shortage of great spots for casual and fine dining.  If you’re fortunate enough to go during the winter (yes, I highly recommend November & December in Prague), you can visit one of the many amazing markets and try some of the best ‘street eats’ anywhere!  In Old Town Square, we noshed on the incredible Prague Ham, slow roasted and ‘melt-in-your-mouth’ tender, then had delectable ‘chimney cakes’ for dessert.  The Czechs love their pork, so be prepared to try it prepared many different ways, like the famous “Pork Knee’.  Don’t knock it til you try it – it’s delicious!  You’ll see plenty of roast pork served with a flavorful gravy, dumplings and saurkraut on most menus, and the world famous Pilsner to wash it all down!

While in Old Town Square, be sure to see the medieval Astronomical Clock, which puts on a  show every hour. 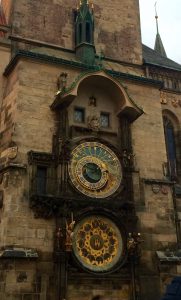 Prague has an interesting history, including some rather bleak periods, including the German occupation in WWII, and the 1945 Communist ‘liberation’.  The country remained communist until the Velvet Revolution of 1989.  The country has emerged as a strong, democratic, free nation, and when you’re in Prague, you need to visit at least a few of the dozens of museums.  The city was mostly undamaged during WWII, so the buildings show their original glory.

The people here are proud, welcoming and aware of how important tourism is to their economy.    What they’re not….is Russian!  I, like many others who thought of the Czech Republic, probably figured the country would be more closely linked to the eastern European countries of old, and I was dead wrong!  The Czechs like to think of themselves as the ‘eastern part of western Europe’, and feel they identify more with Germany and Austria than they do with Russia.  And they’re (surprisingly) not very big on vodka.  Go figure.  Instead, try the local Pilsner or the Becherovka, a locally produced elixir that only 2 people know the recipe for.

Prague is a historic yet modern city, worthy of at least a 4-7 day visit.  Isn’t it time you Czeched it out?