Sleeping on a canal

Feeling virtuous, my wife and I tuck into the elaborate tasting menu  at KYU.
The wine-and-dine extravaganza at the Asian-inspired barbecue hotspot
in Miami’s warehouse-turned-hipster Wynwood neighbourhood is
justified after our stint of voluntourism earlier in the day. 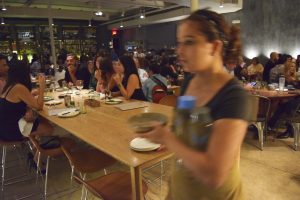 Granted, our hand in mangrove rehabilitation along the Oleta River 15
kilometres away was short-lived. 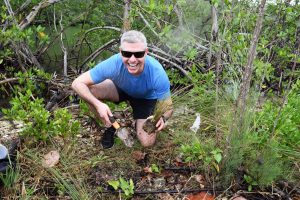 We’d spent just a few hours in the morning planting cord and black
needle grasses in the saturated shore bordering the mangrove.
But, then again, that’s what voluntourism is all about.
You take a sliver of time out of your indulgent holiday to save the
environment, read to underprivileged kids or walk rescue dogs and
feel better about yourself.
It’s one of travel’s hottest trends.  Give back a little while on vacation.

My wife and I’s voluntourism stint is triggered by a visit to the
sleek new 250,000 square-foot, six level Frost Museum of Science in
downtown Miami. 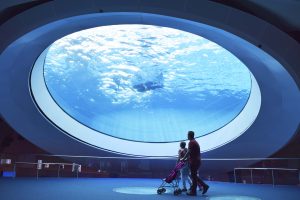 After admiring hammerhead sharks and schools of tuna through the
oculus in the 500,000-gallon, martini-glass-shaped aquarium and
catching the laser show set to the music of Queen in the planetarium,
we find out about The Frost’s volunteer opportunity at its satellite
Batchelor Environmental Centre.

The centre is on the Biscayne Bay campus of Florida International
University adjacent to the formerly wrecked red mangrove along the
Oleta River. 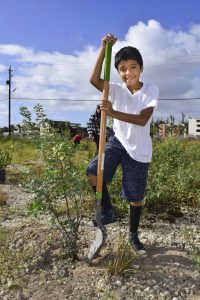 Infill, invasive Australian pine trees and garbage overtook the site
before The Frost showed up with armies of volunteers to make it right
again.  Usually it’s locals with a connection to the museum or the university
who give of their time to pick up garbage, rip out invasive species
and plant native grasses, shrubs and trees.
But increasingly, tourists are jumping on the bandwagon, inspired by
a visit to The Frost and hearing how mangroves are essential to
Florida’s marine environment. 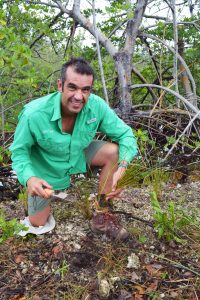 “Mangroves are superstars,” says The Frost’s curator of field
conservation Fernando Bretos as if he’s referring to Beyonce and Jay-Z.
“They maintain healthy water, provide habitat for water, land and air
species and protect against high sea levels and hurricanes.”
Museum Volunteers for the Environment, the catchy MUVE for short, is
Bretos’ passion project to get the public engaged in marine
conservation.
“We could simply hire a contractor to do all this work,” he said.
“But inspiring locals and tourists alike to get involved gives them a
chance to see firsthand how important mangroves are and lets them
leave a legacy.”

On the day my wife and I drop by, there are 40 other volunteers,
planting grasses, beach creeper and ferns on the brackish water’s
edge and blackbead and cocoplum shrubs and green buttonwood trees a
little farther up.
Mangroves are actually the trees that can grow in a couple of feet of
salt or brackish (a mix of salt and fresh) water.
The trees and associated swampy shoreline vegetation are essential in
attracting manatees, bull sharks, crocodiles, stingrays, barracuda,
snapper, tarp and mullet to the waters; crabs, lizards and raccoons
to the land; and bald eagles and ospreys in search of prey.
All of these species have returned to this stretch of mangrove,
thanks to The Frost and volunteers.
Bretos hand us trowels and dozens of bunches of cord and black needle
grasses to plant in the soppy soil at the mangrove’s edge.
We’re happy to get our sneakers and knees wet and our hands dirty. 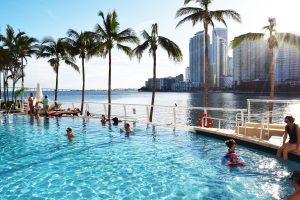 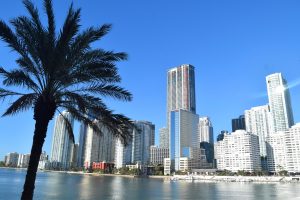